Is Drinking Too much Milk Good Or Bad for Your Health 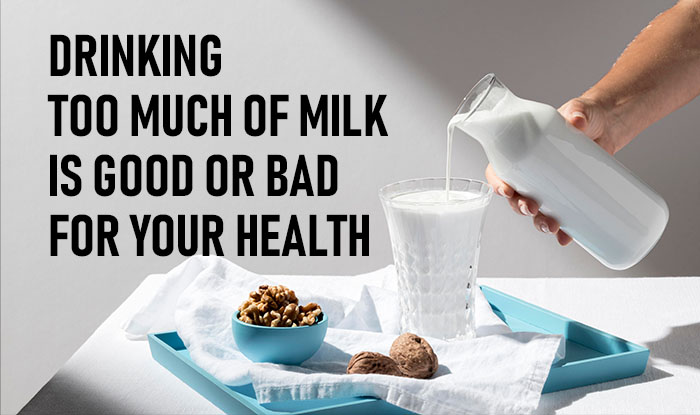 Cow’s milk, a drink that people often associate with good health, is one of the most popular drinks in the United States and Europe.

Milk is a natural food source for mammals. All mammals, including humans, produce their milk to feed their babies until they are ready to eat solid food.

As such, milk contains valuable nutrients that help support the growing body, including calcium and protein.

Research about milk is conflicting, however, with various studies claiming milk is either good for the body or bad.

Due to growing concerns about health, lactose intolerance, and animal welfare, plant-based milk, and dairy alternatives are gaining popularity.

In this article, we look detailed if drinking too much milk is good or bad for health.

How much milk is bad for health?

Every time we heard about the benefits of drinking milk every day. A glass of milk contains high amounts of calcium, a nutrient that is associated with the development of strong bones and muscles. This is why milk and other dairy products are non-negotiable commodities in every household. But according to another theory, drinking too much milk can make your bones brittle. In this article, we have tried to find out if drinking too much milk is really harmful.

Are there any side effects of drinking too much milk?

Milk is very healthy and nutritious for your health, but drinking too much in one day does not guarantee better health. Excessive intake of anything is harmful even if it is as healthy as milk. According to a Swedish study, drinking too much milk a day may be associated with an increased risk of mortality and fracture. For researchers, too much milk meant three or more glasses a day. The results of the study were even more disturbing in women. In the case of women, it was found that drinking three or more glasses of milk each day could nearly double their risk of death, which was lower than those who drank less or non within a day. Men have not been affected the same way as women, but it can certainly increase mortality.

Should you just give up milk?

The result of the study should be dangerous but does not indicate that you should give up the drink altogether. Milk is a nutritional powerhouse. Apart from calcium, it is also packed with other essential nutrients like vitamin D, vitamin B12, and protein. There are several studies that suggest that drinking milk every day can reduce the risk of developing chronic diseases. You just need to consume it in moderation. One glass of milk a day is an ideal option. In light of the study, it is best to avoid drinking more than 2 glasses of milk a day.

Other side effects of drinking milk

Milk is healthy, but it should always be drunk in moderation. Consuming too much of it at once or in a day can cause visible side effects. Some obvious signs of drinking too much are:

Fatigue: A study suggests that drinking too much milk can also cause leaks, which can make you feel sluggish. This is due to the presence of A1 casein in milk, which has an inflammatory effect on the intestinal lining and may increase the permeability of the lining of the intestine.

Acne: Another study published in Clinical, Cosmetic, and Investigational Dermatology found that intake of full-fat dairy products can be associated with moderate and severe acne.

Bloating: Milk can also contribute to digestive issues like flatulence. Even if you are not lactose intolerant, you can still be sensitive to lactose and too much dairy can cause bloating, cramps, or diarrhea.