Beware Of Overhydration This Summer and Its Effects On Your Kidneys 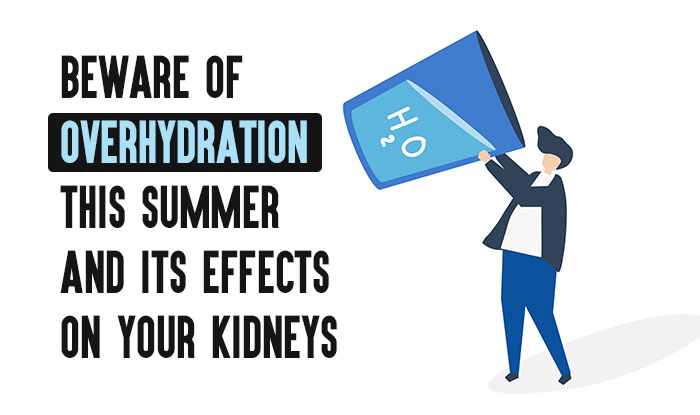 As summer begins to intensify, it is a common belief among all to stay hydrated and consume more fluids. While it is important to keep the body hydrated during summers, people who have medical conditions such as high blood pressure and diabetes have to be wary of over-dehydration during summers. Excess intake of fluids can disturb the electrolyte balance of the body.

Drinking too much water can cause blood sodium levels to fluctuate and in some cases serious health problems. Water intoxication is a condition that develops by accident after drinking too much water, mostly during sporting events or intense workouts. For people suffering from chronic kidney disease or end-stage renal failure, water intake should be restricted as it becomes difficult for them to excrete enough water for kidney failure.

Understand the need of your body

Understanding the need for how much water the body needs to avoid overhydration. One liter of water is actually required per 15 kg of body weight, whatever that may be. The best way to beat the heat of summer without suffering kidney is to consume 50% plain water and other 50% sources like fruits, milk, vegetables, etc., which will balance the electrolyte levels in the body.

How much is needed

Symptoms of overhydration to see in the body

People with kidney problems may have edema due to over-dehydration in which the feet, ankles, and wrists are swollen. This is important to maintain optimal blood pressure as it can present a challenge.

Common symptoms of over-dehydration include:

If over-dehydration is left untreated, it can happen,

Treatment depends on the severity of symptoms. Some common steps can be: